The lesson with Merlin went really well.  It did wonders for my confidence.  There were a number of adjustments that needed to be done to my tack.  As expected, the saddle is too small for me and because Merlin has a round barrel and low withers, it’s going to be a bit difficult to get a saddle to fit him properly.  Getting up to the stable was a bit hairy between Merlin being high as a kite, the surface was wet and in some places slippery and I had to ride on the road for almost a mile, but I made it up there.  Merlin was very good in the indoor arena.  First we lunged him so he could get used to being in the arena, then I climbed aboard.

Getting on that horse is difficult, to say the least.  Between the tendency of the saddle to turn, no matter how tight the girth is and his unwillingness to stand still; difficult is probably not a strong enough description.  The instructor, Erica, suggested a neoprene girth which has some tackiness to it which will help the saddle stay on better.  I went a step further and got a neoprene saddle pad (because of his extreme tension, Erica had also suggested a thicker pad so I killed two birds with one stone with the saddle pad).

My homework is to work on calming him down.  Erica thought that he had been “cowboyed-up” a lot by his former owner(s) and because of that he was in a state of constant high alert waiting for what was going to happen.  It doesn’t take much to get that horse moving; keeping him going calmly is very difficult.  I have to get a training martingale for him to help bring down his head carriage.  He may never settle down completely, but hopefully he’ll relax at least to some extent.

Yesterday, I drove almost 200 miles doing errands, including looking for a new saddle.  I drove out to a local tack shop where they had two saddles that fit me.  One is made from synthetic material, the other is leather.  The synthetic saddle felt wonderful to me, but I don’t know how it will fit Merlin.  Luckily, the owner of the shop is going to let me buy the saddle(s) and if they don’t fit him properly, I can return them.  That is a good thing.

The game plan today is to drive out to the tack shop and pick up one of the saddles (I’m on the fence as to which one to take) and bring it home to try today and if it doesn’t work, I’ll bring it back tomorrow and try the other one.  I’m going to take the saddle that is too small up with me to see if she can sell it.  Apparently, she had two people looking for that size saddle recently so hopefully, it will sell quickly.  I have a few other things, like the bridle we bought at the auction, to bring up to try to sell as well.

If neither of these saddles fit, there’s another one at a local consignment shop that I can try under the same arrangement.  I like the idea of buying used equipment.  I see no sense in buying new if I can find used tack in good condition.

Geez, back when I was riding as a “youngster;” fitting tack to the horse didn’t seem to be such a big deal.  You had a saddle, you put it on the horse and you rode.  Also new from when I was riding is this natural horsemanship business.  I can see treating a horse kindly, but some of the practices that these individuals preach is a bit over the top; it’s quite similar to purely positive dog training.  Erica is kind to the horse, but she doesn’t take any crap off them either.  For example, Merlin throws his head around quite a bit.  He isn’t tossing his head, but he pulls on the bit trying to get the reins loose, at which point, he’s off and running.  He also turns his head around to the left while he’s in motion.  At first I thought he was doing it because there was something wrong, i.e. the girth was pinching him, but I feel sure there’s nothing bothering him.  Why he’s doing it, I don’t know, but he needs to stop doing it because it isn’t safe.  I wish he could talk so he could tell me what has happened to him in the past.

Both of my bikes are sold.  The woman who bought the road bike was thrilled with it.  The mountain bike went to a man who rides during his lunch hour with his co-workers.  He had a bike from Wal-Mart so this one was a definite improvement.  It seems odd for them to be gone.

The banana bread factory is going full steam ahead.  I started at 7:00 AM and made eight batches, the largest I’ve ever made at any time.  I just took out eleven loaves and have another fifteen or so to bake.  These will be Christmas gifts for neighbors and friends.

Poor Split hasn’t had any work in quite a while and she’s become quite obnoxious.  She isn’t going to be as easy to live with as Fern was.  She’s like Merlin, in a constant state of alertness; always looking for something to do.  I have to keep a close eye on her while she’s outside because if I don’t, she’ll be off working something, be it the ducks, chickens, geese or goats.  In the house, it’s the cats.  It isn’t fun to live with.  An off button is a good thing.  She’s young, maybe she’ll settle with age.  Then again, Gel doesn’t always settle in the house.  Such is life with Border Collies.

This is Ruth, a Rhode Island Red hen and she lays an egg every day in this pot on the back porch.  Very convenient. 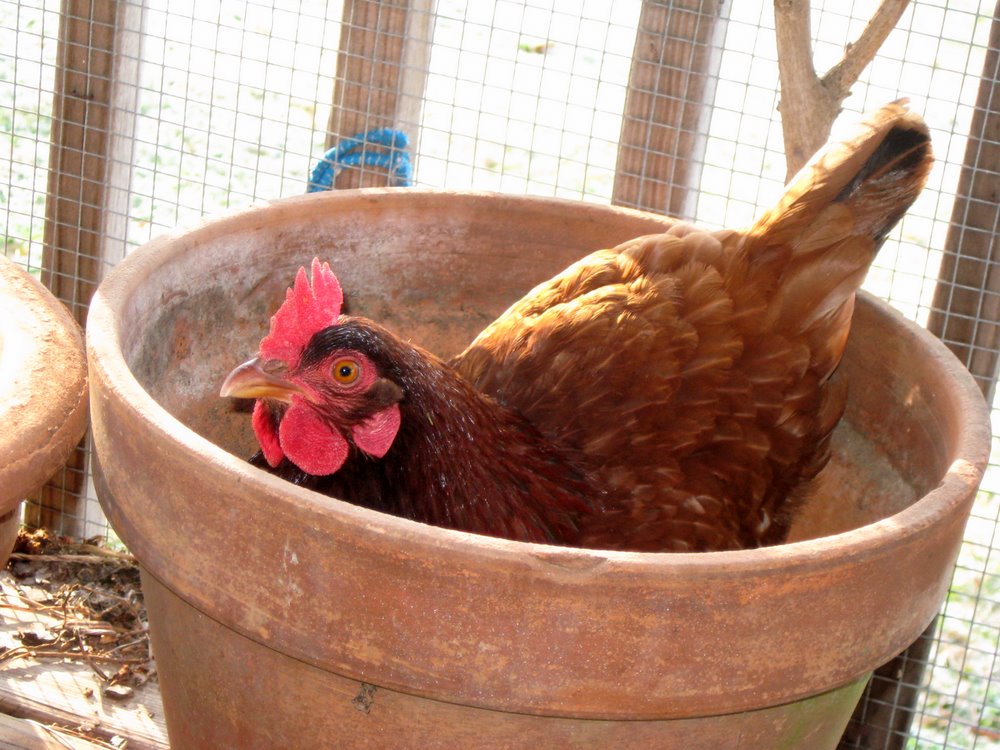