We’ve had somewhat of a difficult month so far. On December 28, I bought three bags of tainted rabbit food and throughout the beginning of January, lost a total of six adult does, one adult buck and too many baby rabbits to count. Five of the adult rabbits were heritage breed rabbits (American Chinchilla and Crème d’Argent) and will be difficult to replace.

I’m sorry that it took the loss of these rabbits to get me to the point of switching to an all-whole-grain diet for the rabbits; but I guess I can’t question the how’s or why’s of farming. Death of animals is a part of farming, but I don’t think I’m ever going to accept that. It is particularly difficult to accept when the deaths are due to something I fed them. Quite frankly, I am now dubious of any commercially-prepared animal (or for that matter, human) food.

I did get a deal on a large number of breeding-age rabbits to restock my herd. They are commercial-breed rabbits (Californian and New Zealand crosses), but once I can get the heritage breeds going again I’ll move the commercial breeds on. We put up four fryers this past Sunday and have four more to process in the next couple of days. I have yet to put a price on these rabbits, but if you are interested in one, please let me know. Remember these are pasture-fed rabbits, fed a corn and soy-free ration. Rabbit meat is one of the healthiest meats available. Watch our Facebook page for rabbit recipes. I will be processing most of the adult bucks that I bought recently (luckily I still have two heritage breed bucks still alive) and plan to make them into sausage. Let me know if you are interested in that.

Gwen, the milk cow, is now on a corn and soy-free grain ration. She eats a mixture of soaked beet pulp, organic alfalfa pellets, oats, barley, sunflower seeds, molasses and kelp. I am currently researching means to get her off the beet pulp which is GMO. Everything else she eats is non-GMO. I feed the beet pulp for the energy which is important for milk production. The food I was feeding her was doing nothing more than screwing up her digestive system and while switching her off that food, she was not a happy cow, but now that I’ve got her switched, her energy feels a lot better to me. Her milk production has dropped a bit, but the milk that she does produce is healthier.

We started the kidding season on January 18 with two kids born to Heavenly. I expect the rest of the does to start following suit and expect that they will all be done within a few weeks. The goal is to not milk any goats until the middle to end of February; we’ll see how that works out. While on the milk stand, the goats will be a mixture of alfalfa pellets, oats, barley and sunflower seeds, no corn or soy. Note: Gwen only gets her grain mixture while milking.
The chickens are still not cooperating in laying, but ‘tis the season. The days are too short and the temperatures are too cold for heavy laying. I could put lights in the chicken coop, but like so many things, eggs are seasonal and I don’t see a lot of sense in changing the true order of things using mechanical methods like extending daylight. 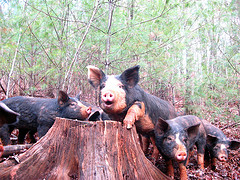 Perhaps the biggest, most exciting news is that I got a job! A dream job! I am now in charge of the marketing, writing the bi-monthly newsletters, web site maintenance, maintaining the Facebook presence and attending the Charlotte Farmers Market on Saturdays for a local, sustainable farm: Rock House Farm in Morganton, NC. I’ve had the pleasure of trying many of their products and they are WONDERFUL! I highly recommend that you take advantage of my affiliation with Rock House Farm and order meat through me.

On sale through the end of January:

Rock House Farm has Waygu/Angus Cross cattle, 100 percent grass-fed (no grain is ever fed to them); heritage breed pigs, all forest-pastured, pastured chicken and duck.

Isn’t that the goal of small, sustainable farms: to keep animals in a natural environment that does not destroy the land? I hope that you all continue to support local farms.