I think.  Struggling big time with this heat.  I don’t do well in extreme heat.  It simply saps me. I hate the sound  of the A/C constantly running (of course, I’d hate it more if it wasn’t running). I’m tired of being constantly sweaty.  I worry BIG TIME about the animals.  Except for two rabbit and a few chicken losses, everyone is okay.

My birthday was this past Friday and I got a fantastic present: 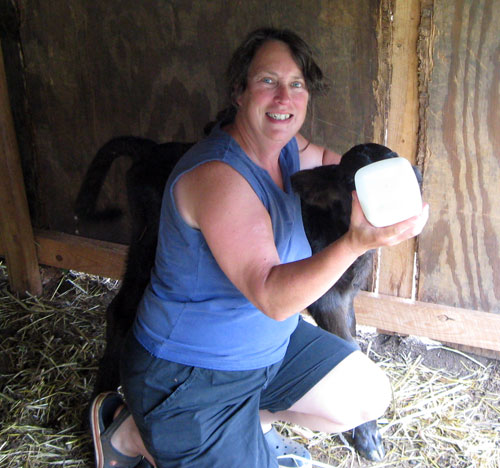 This is a young Simmental calf  who got separated from his mother soon after birth.  He was one of twins. A good friend of mine knew of him and called to see if we wanted him.  Hell yea!  His meat won’t taste as good as a Jersey’s, but he’ll grow quickly.

Finally got an appointment to have our next batch of chickens processed:  August 6. I went ahead and scheduled the next batch for October 15.  Both dates are a little later than I wanted to take the birds, but it was what I could get.  Because we are now Animal Welfare Approved, I cannot process chickens on the farm.  That’s fine with me.  It’s enough keeping up with rabbit processing.

During one of my recent rabbit processing mornings, one of the young American Chinchilla got loose before I could finish the deed. He proved to be a wily rabbit and for weeks eluded capture.  This morning, we finally managed to trap him and we discovered he is a buck which is a good thing because I need a replacement American Chinchilla buck and he’ll fit the bill.  There’s also a young Silver Fox buck loose and hopefully we’ll be able to trap him soon. It’s all about trap placement.  We’ve been trying to trap them for days, but I moved the trap to a different location this morning and it worked.

There has been a good bit of digging going on in the tractors, most of it I think is due to the heat, but it seems there’s something about the PVC that’s under the wood that seems to deter digging out.  That may be just a fluke.  We’ll see.

I’m completely discouraged with the garden.  The heat toasted the green beans.  I pulled them up and fed them to the rabbits.  It’s been too hot to be in the garden and as is always the case, the tomatoes are growing every which way.  I spent a little bit of time in there this afternoon and tied up a bunch of them, but it’s simply a mess down there.  I may simply give up on the garden and just plant ground cover and greens to harvest for the rabbits. Half of the sunchokes that I transplanted a few months ago are doing fine.  I wish I had planted all of the plants I was given, but they looked like they were going to die.  It seems sunchokes are tough!  I  may inter-plant some sunflowers with the sunchokes for a dramatic display (and tasty rabbit forage).