We didn’t get much more than a few sprinkles until around 3 AM this morning.  The showers came with thunder and lightening so I had to get up and unplug the electronics.  Now, we are just getting a slow, steady rain.  Loving it!

The garden is in a sad state.  I know one year I’ll figure out how to manage the animals and the garden.  The heat did a good bit of damage to the tomatoes and green beans.  The green beans got severely burnt.  Maybe the cooler temperatures and rain will revive them.  The tomatoes stopped setting fruit and what blooms they had on them dropped off.

I know the animals will be happy with the cooler temperatures.  The calf has a snotty nose.  I have a call into our vet to find out how to treat it.  When I went to check on him this morning, he got up and started butting me for milk so maybe he’ll recover on his own.  I know this heat has been hard on him.

When I went out to check on the calf, I went ahead and let the goat kids out.  I’m probably going to regret that because I’d love to have enough milk to make cheese, but I need a bit of a break.

In anticipation of heavy rain, yesterday afternoon, I pulled all of the rabbit tractors up from the lower part of the pasture to higher ground.  We have seven tractors going right now (one more coming as well as two more 4 x 4 pens).  It’s a good bit of work dragging all of those tractors up the hill!  I was soaked with sweat!

Rabbits are  social creatures.  Even in this extreme heat, they lay in rabbit piles. 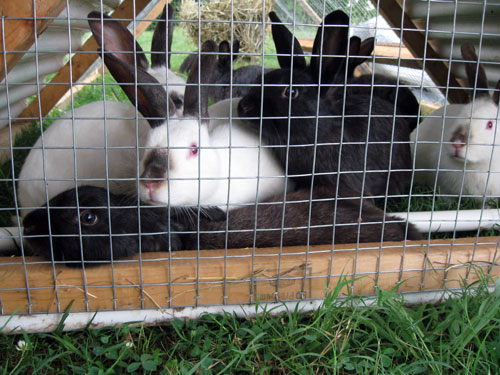 As you can see, we still have some of the commercial breed rabbits.  All of the ones in this picture are fryers.  The mother to these rabbits has a litter of nine American Chinchilla X rabbits and depending upon how this current litter grows out, she’ll probably be sold or butchered for sausage.  The rabbits in the picture should have been butchering size several weeks ago, but they haven’t grown off as well as they should have.  I still have three or four commercial breed does.  One, named Mooney, will stay and in fact, I kept one of her daughters from the last litter.  Every single one of her babies grew quickly to fryer size.  She’s got seven young rabbits with her right now.  She’s a gentle, easy to handle doe.

Almost all of my young Silver Fox does are in the 10 x 10 pen.  They are old enough to breed now, but I’m going to wait for another month before breeding them.  It’s too hot.  Teddy Bear, my only of-age SF buck is going to have a busy time.  It’s nice to see the rabbits growing out well and not have the losses I was experiencing.  Running this farm has been a huge learning curve.

I spoke to several individuals yesterday about getting grants from Animal Welfare Approved.  I also did a search of all of the approved farmers in the United States and there’s less than a dozen approved for meat chickens!  I didn’t realize that!  That’s unfortunate and it concerns me some.  I am afraid the reason why there are so few is because you can’t make money raising broilers other than the meat hybrids or in tractors.  AWA does not allow meat birds that gain more than 0.075 pounds per day which of course eliminates the Cornish Cross.  I believe they allow the Freedom Ranger type of birds, but I’m pretty sure they can reach market size in ten weeks which is still fast growing.  I also revisited approval for the rabbits; I still doubt that will happen, but all they can is no.

This is a bit of a dilemma here.  I spoke to a woman in Georgia who raised Delawares as meat birds.  She admitted that their carcass was not like that of a Cornish Cross or other meat hybrid (all of those Ranger birds are meat hybrids) but that she didn’t have any trouble selling them.  It was about the education.  I’m good at educating.  We have some dual purpose birds going to the processor on August 6.  It will be interesting to see how they look and taste.  In general, the public is not accustomed to eating “real” chicken.  What you get in the grocery store now is spongy, tasteless meat.  That one older rooster that we processed the last time tasted good!  I didn’t eat much of it (I cooked him in the crock pot for his broth), but what I did eat was good.  I let him rest in the refrigerator for five days before I cooked him.  I think that’s the trick: aging the meat.

Grant writing is an art.  I reserved some books at the library to read.  I’m looking at it as a challenge.  I spoke to the man who is doing our rabbit tractors telling him that if we got the grant, we’d be engaging his services to build the moveable meat bird pens and the permanent laying hen house.  He’s great at drawing up plans and he is more than willing to use and re-use materials which will cut costs.

A friend of mine asked me yesterday if I was going to write up a business plan.  I thought about it and quite frankly, I didn’t know if I will or not.  I should. It’s hard for me to get my head around that.  This farm was not started as a business.  It was started back in 2008 as a means of survival; of eating better on a limited budget.  It’s doing well; we are eating excellent food that we raise ourselves.  We are developing a following.  At the Farmer’s Markets, we are starting to see repeat customers.  We are hoping that after the local markets end in the fall that we’ll have enough people interested in coming to the farm to buy meat.  I expect, however, we’ll need to go to the Charlotte market until the local markets open.

Off to do chores.

One Reply to “Relief! Finally!”