So, I get a late start doing AM chores this morning.  It was raining and I think the humidity has turned me into a slug.  Got out there and started and Howard, the man who made our rabbit tractors pulled up with the tractor that he put a second level in for added shelter for the rabbits in cold weather.  As always, he did a great job.  While he was here, he had to measure the rest of the tractors to make inserts for them.  Right after he left, I happened to look down below and saw only three calves: the Guernsey was missing.  Hmmmm, I thought to myself, did I see him last night? My slug mind couldn’t remember.   So I get the ATV and Gel  and I head down to look for him.  We found him, with his leg hung in the field fence.  He was on a hill that had become slippery in the rain and couldn’t get up.  I ran back up to the house and got the wire clippers and called Howard to ask him to come back to help.  I managed to get his leg free, but there was no way I could get him moved to a more level area.  Howard had a hard time lifting him!  He’s a four month old Guernsey bull calf and even though his previous owner didn’t give him much for groceries, he’s still at least 100 pounds.

Both Howard and I were covered in mud by the time we got him up closer to the house.  I do not think his legs are broke, but he’s had a tough 12 or so hours.  I gave him a half a bottle of milk which he weakly sucked down.  After I finished milking, I went down and gave him another bottle, which he took a lot better.  I gave him a pile of hay that he can munch on.  He doesn’t seem inclined to get up, but at least he’s sitting upright and taking interest in what’s going on around him.  Hopefully he’ll be okay.

As I write this, Wally is about half way home.  He can’t get here soon enough!  I miss him!  Hopefully he can kick me in my slug butt and get some action out of me.  I feel so, well, sluggish!  I vacuumed  the living room and when I took a break to check e-mail, my reading glasses fogged up when I put them on.  I will take a shower before Wally gets home, but I know  the clean feeling isn’t going to last long. I can’t wait until this humid weather breaks!

Now would be prime time to get into the garden, but I’m afraid the other slugs may kick me out of the garden and the way I feel now, it wouldn’t take much to kick my slug butt.  Maybe Wally’s arrival will bring some fresh air.

He’s bringing home two new Silver Fox rabbits, a black doe and a chocolate buck; as well as two adult American Chinchillas (a doe and a buck) and a litter of three kits, one of which is a doe.  This will bring in some additional genetics.  Here’s a photo of me and Teddy Bear, the resident black Silver Fox buck.  He is a great big teddy bear! 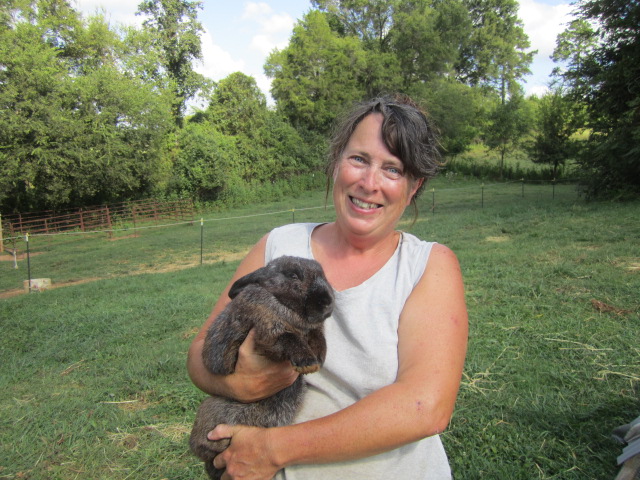 I miscalculated Gwen’s due date: she’s due September 8, not the 1st.  That’s a good thing because Wally will be here in case there are any issues.  Her udder is huge!  I may have to milk some off her to make her more comfortable and mobile.  I put her in the back pasture this morning.  Now that the ground is a bit softer, I need to fence in a second paddock for her.  But, that takes doing something and lately I can’t do much of anything.

Well, I guess I’m going to go and take a nap now.

One Reply to “Just another day at the office …”