Good schooling sheep are worth their weight in gold.  My history with sheep didn’t start out so well.  Several years ago now, I sold the seven goat kids I bought from Wally and put that money into four “dog-broke” ewes from a local farm.  “Dog-broke” sheep are those that have been worked on a regular basis by a dog.  Being worked on a regular basis doesn’t necessarily result in good working sheep.  It all depends on how they’ve been worked.  It also depends on what breed of dog has been working them.  If you have a dog that works with eye, as Border Collies do, you probably don’t want to buy sheep that have been worked by so-called loose-eyed dogs such as Australian Shepherds.  Sheep that are used to loose-eyed dogs often don’t take well to being worked by a dog with eye (been there, done that!).

Well, this first group of sheep I purchased had been worked by Border Collies and had been used in Border Collie trials, but they were older sheep and had started to get sour.  I was also asking Gel, who was very green at the time, to take on more than he could chew.  It was ugly.  Those sheep tried to kill both Gel and I.  More than once, one or two of them ended up in the pond.  Once one ended up in the wilds of the back pastures which were, at that time, not cut and hadn’t been cut for a couple of years so they were all but impassable by foot.  Luckily, Gel had enough talent to go down and find that lost sheep and brought her back on his own.  Good dog.

One day, I tried to take them out into a side field that had been cut.  Our trip out to that field went bad from the beginning and the sheep took off into the field.  Gel tried to stop them, and in retrospect, I should have let him (he did know best, I didn’t trust him at the time).  I thought the sheep would get into the field and stop.  Nope.  They went into that field and kept on going, through the field and down the street.  We followed them and tried to get them back, but Gel’s inexperience, the danger of being on the road, neighbor’s dogs and freaked out sheep made it impossible.  I managed to push them into a field at the end of my row where some cattle were pastured behind barbed wire fence.  I hoped they’d stay in that field until I could get some help retrieving them.

When I went back the next day, the sheep were gone never to be seen again.  That was $360 down the drain.

I almost gave up then and there, but I saved my money and bought four young St. Croix ewes.  They are only $50.00 each.  Great bargain, huh?  Yet another mistake in my sheep buying experience.  These young ewes were like herding deer.  Luckily I decided pretty quickly to sell these sheep, which I did, and actually made a bit of money on them.

I went back to the original farm to buy four more dog-broke ewes.  These sheep cost me $400 because they were younger, nicer sheep than the first batch.  I brought these sheep over to Wally’s and kept them there for several weeks.  I grained them and made friends with them before even introducing them to Gel.  Meanwhile, I fenced in my first enclosure, the so-called “first-fenced-in-area.” 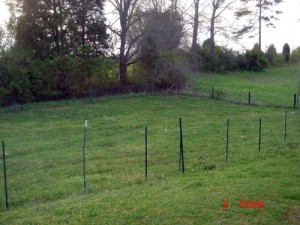 You may recall, this was the first time I did any fencing and it wasn’t done so well (see the photo above), but it kept the sheep in when I worked them with Gel.  Later on, Wally and I fenced in a second enclosure.  This one was done right and it is still standing (the first one is not, I took that fence down a few months ago and moved my agility equipment down there).  The second group of ewes had lambs and that was my first experience with working ewes with lambs (not a good one).

I’ve learned a lot about sheep, mostly the hard (wrong) way and spent (wasted) wasted a whole lot of money along the way.

When it came time to teach Gel to drive, I discovered I needed some really well-broke sheep.  My ewes and their lambs were okay, but usually when I set them up for driving in an open field, they’d run (and run and run and run).  Gel was trained enough at this point so that I didn’t loose them, but our driving training wasn’t going well.  I posted on Sheepdog-L looking for good, solid, dog-broke sheep.  A man who lives out in Asheville contacted me and I went out and bought four Dorper ewes from him, to the tune of $150 each!  That was $600 for four ewes.  They were good working sheep though.

We’ve come a long way since then.  I’ve learned some stock sense and Gel has improved.  I can manage the sheep much better and even when working Fern, I can usually get by with sheep that I wouldn’t have been able to manage a few years ago.

Wally and I have a very good arrangement.  He keeps the adult ewes and the ram at his house.  The ewes get bred and have their babies over there.  When it is time for the lambs to be weaned, they come over to my house and I keep them until they are ready to be bred the next year.  Wally arranges for the ram.  Some of the adult ewes do belong to Wally, but no matter what ewe they come out of, I get all the ram lambs and he gets all the ewe lambs.  It is a very good arrangement.  We split the costs for food and worming medicine.

I have realized, however, that I still need some solid working sheep, no matter what my dogs’ experience level is.  Lambs can be a royal pain-in-the-ass to work.  I had just managed to get the group of last year’s lambs well broke when it was time for them to go over to Wally’s to be bred.  When a man in South Carolina posted recently to Sheepdog-L that he was looking for a home for eleven good schooling sheep, I e-mailed him immediately.  Luckily, the people who were ahead of me in contacting him feel through and I moved up to the head of the list.  Wally and I are going to head down there this weekend to pick up these sheep.  It’s a long haul down there, about 450 miles round trip and given the current price of gas, it is going to be an expensive trip, but given that I have paid so much money for sheep in the past, I think it is worth it to drive down to get these sheep.  In addition to the sheep, he has some drive panels, a pen and a Maltese Cross (an obstacle that is sometimes used in USBCHA trials) to go along with the sheep.  All for free!  I am very lucky.