I love sunflowers.  You’d think if I loved something that much, I would have planted it, but I’ve been a dud lately as far as planting things.  While Wally and I were out the other day, we saw this field of sunflowers and I knew who owned the field so I called to see what he was going to do with them.  He planted them for his friends to dove hunt and then he planned to bush hog them down.  I asked if I could cut some for the rabbits and he told me to cut as many as I wanted.

The next day he called and said he had some extra seed and if I planted them soon, I would get a crop of them before frost.  I finished milking and Gel and I drove out to get the seed and to cut down some sunflowers.  I doubt I’ll get to plant the seeds today, but hopefully by the end of the weekend, I’ll get a couple of beds planted with sunflowers.

Remember how many times I have said, I should glue a camera to my forehead?  Well, this time I was smart enough to bring the camera.  I am now the proud owner of two Nikon cameras: a D70s and a D90.  Both are “old” cameras, but they are both very functional and good pieces of equipment.  I thought the D70s had gone belly up a few weeks ago and got a good deal on a used D90, but since then I’ve discovered it was the battery in the D70s that was causing the trouble.  I brought the D70s to a technician last week to have it serviced (for the first time!), bought two new batteries and it’s functioning perfectly now.  I use the D70s to take with me when I know the going would be rough, keeping the newer D90 for other work.

Took these images this morning: 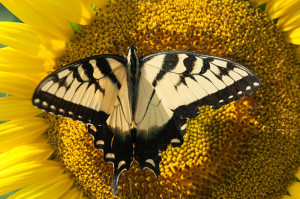 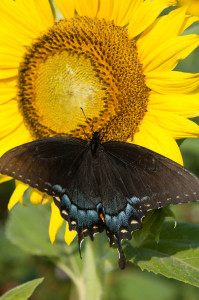 View from a sunflower: 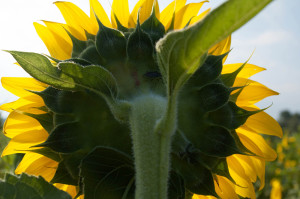 Unfortunately, the rabbits were less-than thrilled with the sunflowers which is odd.  I thought they’d love them.  Well, that’s all they are getting until this evening so they best learn to like them.  Fussy buggers!

Almost every morning I take my scythe and go out to cut grass for the rabbits.  I love the scythe!  It is very meditative to be using it.  Except for my labor, which in today’s market is not worth much and the little bit of gas the ATV uses to haul the grass, it is free food. I could maybe get a job at Walmart and get paid $9/hour or so and be miserable contributing to our broken food system or I could be out in the fresh air cutting healthy food to raise healthy, sustainable meat. I think I’ll keep scything grass. 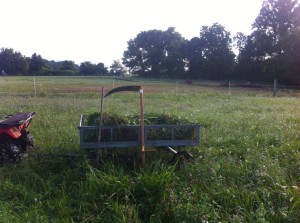 One Reply to “Sunflowers!”