We are currently struggling in the milk department.  With only one cow in milk and two calves to feed, we are constantly running short.  That’s a huge change from a few months ago when I was literally throwing milk on the ground.  I think the Milk God is getting me back for that indiscretion.  Back when it was so wet, the cows were doing really well and the milk was flowing, but now that we’ve reverted to desert status, Penny has been reducing her milk production by a half gallon a week.  Last night, we got just a gallon and a half, enough to feed the two calves and to fill a bowl that the dogs and cats drink out of.  None for the refrigerator.  At one time, Penny was giving three gallons a milking.

Cocoa is due to freshen on September 21 and that cannot come soon enough.

Back when it was so wet and the cows were doing really well, the rabbits were not doing well.  Now that it has dried off, deaths are rare, which is a good thing!  They are not eating so well because it is hot, but at least they are not dying and I have plenty of rabbits to process.

In an effort to add a reliable consumer for our raw milk, we have decided to test the waters with humanely-raised veal.  Some people believe consumption of veal is unethical, which it is if the calves are raised in a conventional manner on milk replacer that keeps them in an anemic state (so their flesh will be white) and restricting their movement.  We have been raising dairy calves on raw milk for many years now, but this will be the first time we’ve offered veal.  Hopefully it will sell well.

It is a good thing this farm is as diverse as it is.  When one portion of it is not performing well (right now it’s the dairy cows), another portion (the rabbits) is.  If we only raised one type of animal, we’d be in some trouble now.  The ducks were happy as ducks could be during the wet weather.  They are not so happy now, but they will be okay.  Finally, they are starting to pick up on their laying.  The vegetables are not doing well.  Just about every bed that I planted back in August has either failed to germinate or has been eaten up by what I believe are caterpillars.  All those beautiful butterflies that I have photographed this summer meant lots of caterpillars.  I was going to spend some time in this garden this morning pulling up grass to feed to the rabbits, but apparently stinging caterpillars have become quite common and I really do not want to get stung so I’ll be using a weed eater to clean up around the beds.  Thanks to school, the garden has been horribly neglected over the past month.  The end is in sight!  Three more weeks and I am done with the two on-line classes and will only have my two photography classes to do work for.  Yes!

There is some benefit of the photography courses: 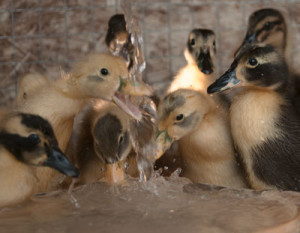 Lots of great photographs!  This is the group of ducklings I recently incubated.  As you can see, they are having a wonderful time!  I had a wonderful time shooting them playing in the water.  I have more shots to share later on.

Because of glare on my monitor, I had to hang a heavy blanket up over the window in my office so I cannot see if it is getting light out yet, but it is almost 7:00 so I best get going and get it done before it gets too hot.  Last hot day, hopefully, for the summer.  I am looking forward to cooler weather.