We were going to start putting up fence to the second pasture this Saturday, but we thought we were going to get rained out so we cancelled our help (two young boys, Guy and Joseph Perkins, who have been an incredibly amazing help since we first started putting up fence and moving to our new farm).  Then they changed the weather forecast: no rain! We lined the boys back up, but since we will not have time to go and get the fence before Saturday morning, we are going to get the last ShelterLogic building up, move the hay that is in the greenhouse into that building, clean out rabbit tractors and under the rabbits in the barn, and move the last line of cages into the barn.  That should take at least half of the day, but it will be good to have all that compost in the beds so they’ll be ready to plant in come spring.  I’ve got several beds ready to plant in, I need to spread a layer of straw over them and then a layer of purchased top soil and they will be ready.

Instead of double digging our beds like we did at the old farm, we are using sheet mulching to prepare the beds.  Double digging seems like a good idea, but all that digging disturbs weed seeds which results in lots of weed growth.  That is not a terrible thing because the rabbits happily eat the weeds, but it’s extra work that I really do not need to do.  Why work harder than I have to?  To sheet mulch, you put a layer of cardboard or newspaper (we have lots of cardboard now after our move), wet them, then add a layer of compost (we got lots from our rabbit tractors!!!) and a layer of straw.  If you want to plant right away, you add a layer of top soil, otherwise, you just let it sit for several months to naturally turn to rich garden soil matter.  Once this mulching is complete, we will just continually add compost to unused beds to keep the beds in good shape.

At our old farm, I planned to do better with the garden, but we found this house in June and I did not want to put the work into the garden given that we were going to move.  Unfortunately, we were unable to take many of the raised beds from the old farm, so we will need to make more of them.  Wally, are you reading this?

Before I approach Wally about building more, I’ll have all of the existing beds planted.

Have you noticed I’ve written two days in a row? I’m trying to get my writing muscles in shape.  This coming semester I am taking documentary photography which is a lot of writing.  I am also trying to get myself more noticed.  Facebook is not going to do it. 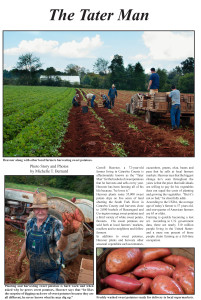 Above was the final project for photojournalism this semester.  I got it printed out on photo quality paper, framed it and gave it to Carroll Heavner, the “Tater Man.”  I called him yesterday to make sure he got it because I had left it in front of his tater house since he had company when I stopped by.  He all but was in tears because it “was so beautiful.”  He also said that he did not know that I was so good.  That made me feel really good.  He wants another copy for his daughter.

I hope to find another farmer like Carroll to do for my semester project in documentary.

I cut up and packaged 13 rabbits yesterday, I’ve got seven more to go.  It’s a lot of work!  Once these rabbits are in the freezer, I’ll try to get at least two more pens done on Saturday.  Want to get the tractors emptied before it gets really cold.  All but one group is ready to go in the freezer, many are past ready.

Over the break, I am going to try to tan rabbit hides.  What I’ll do with them once they are tanned is unknown, but as beautiful as the rabbits’ coats are, it’s a shame to not use them.

Time to go and milk.  I am trying to stay in a schedule as reasonably close to my school schedule as possible.  We have been milking around 5:30 to 6 PM which means I need to be out there as close to those times in the morning as possible.