I finished my fifth semester at CVCC with all A’s. I was not terribly enthralled with my final portfolio grade, but it could have been worst.  The primary negative comment was that my images were flat. Unfortunately, when photographing in the conditions that I was for this group of images, there was not a lot of tonal range available. They were not studio shots.  I did not use artificial light of any kind – just available light (of which often there was little). The portfolio was documentary in nature, not portraiture, not still life, it was real, what was there at the time. In my heart, it was successful.  I still got an A in the class and I suppose I should be happy with that. We were provided with an audio recording of the judging, but I have not listened to it.  I may not ever listen to it. The good comments were on my composition and textures.  I wonder though, can a flat image have texture? If there is texture, is there not a range of tone in the image? The toning that I used throughout the portfolio may have added to the conception that the image was flat, but I did that to make sure the portfolio had the same feel to it throughout. Also, the plastic that the prints were enclosed it may have contributed to make them look flat.  Maybe they were flat? If so, I have to wonder why nothing was ever said during our in class critiques. I thought I knew what a flat image was.  I guess not.

Whatever, it is over now.  I will continue with my photography and now that I am not under deadlines, I can wait for good light or simply capture the moment, something which I’m good at. I will keep telling stories.

Wally and I decided that we were going to slip into warm weather mode here at the farm. That means we get up early, get the animals cared for, then do work in the garden: 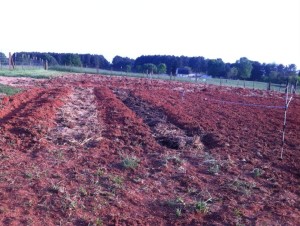 of which we have A LOT! We’ve got six more permanent beds to be constructed and then the back part of the garden needs to be re-tilled so it can be seeded. We are hoping we can get the push tiller through it.  I will convert that section to permanent beds later in the season.  Right now, we’ve got a lot of seeds to get into the ground.  This is how the garden looks now.  It is an iPhone image so it is not too clear.  You can see I’ve got four permanent beds constructed, we should be able to do ten across.  The rows are covered in manure and straw from either the rabbit tractors or the goat shed.  The goal is to plant in these beds and then when it is time to harvest the vegetables and pull up the plants, I will shovel what will then be composted manure and carbon material onto the beds and then replant them.  Ideally, these permanent beds will never be open dirt (unplanted) and will never be tilled again.  High goals indeed!

The back portion has huge clods of grass in it.  This area has been in pasture for many, many, many years.  We had a friend with a tractor with a plow and then a disk go through it, but the grass did not break up well.  I was picking up the clods and removing them, but given it has been dry for about a week now, they are pretty fragile and break up when I pick them up so hopefully the tiller will go through it.  In this back area, we are going to mark out permanent beds and plant them with sprawling crops like pumpkins and squash and a few rows of corn with pole beans running up them.  Unfortunately, we will not have enough straw/manure combination to make the rows in the back portion for a while yet.  Hard to believe!  Of course I could go and get some from another farm, but I want to keep everything on-site as best I can.

The goal of an integrated farming model like I got the grants to develop is finally coming to life.  I tried to do it at Herter Road, but we neither had the tools or area to do this type of garden.  You can grow a lot in raised beds, but even our raised beds are running behind because the rabbit/manure straw that I’ve filled them with has not completely composted. It will be too rich to plant anything but heavy feeders like tomatoes in them.

Thank goodness for cover crops because we can utilize them extensively to keep the beds planted over the year.  The beds are spaced far enough apart so that I can easily use by scythe to harvest what we plant as far as cover crops for the rabbits and ducks.

Now we need some rain.