I knew once we got the drip irrigation installed, the weather pattern would break.  It has not broke yet, but according to the weather forecast, we are going to start to get some rain. 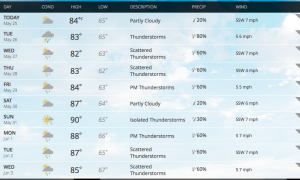 Of course, what the weather says it is going to do is very different from what it actually does, but there’s hope for rain!

No matter, we got the drip irrigation installed: 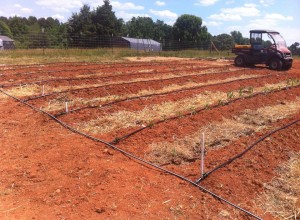 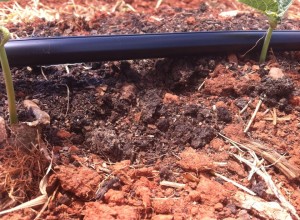 Wally installed it while I worked on digging beds in the upper part of the garden.  He said it was very easy.  It works perfectly! We left it on for about five and a half hours yesterday and when we turned it off, the ground felt very moist. Now, we will not use it for more than an hour or so at a time. We need more pieces before we can install it into the upper garden (14 more rows), but I’ve got, I think, ten more rows to dig.

We had to have a little bit of fun too. For as long as I’ve had a “garden” I’ve wanted to make a scare crow, but we never did, until yesterday: 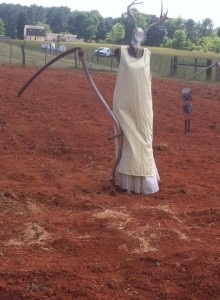 There was an old dress form in one of the storage buildings on this property.  The old scythe was given to me.  We found the deer skull in the creek on the lower part of the property.  We like our scare crowess.  Hopefully she’ll keep the birds from eating our seed and not scare too many humans away.  We are going to install some solar lights at her base so she’ll be lit up at night. She’s holding a cat chime in her other hand, but it doesn’t really chime any more so we need to get some bells to install in her so she’ll ring in the wind.

I’m turning comments back on.  Let’s see if the evil being that was leaving crappy comments comes back or if my scare crowess keeps him away!