Often as I’m out in the milk room by myself (at least with no other human company) I wonder why it was that I’ve become so connected to dairy animals. It started in 2008 when I had the strong feeling that I had to have a milk goat. It took quite a while for me to find one that I could afford. At that time I didn’t know that you get what you pay for with a dairy animal.

I arranged to purchase a LaMancha goat named Rain. I was slated to pick her up on October 15, 2008. As it turned out, I found out I was getting laid off from my high paying job as a commercial real estate paralegal on that day and I almost didn’t go to get Rain but I did. Rain is pictured below. 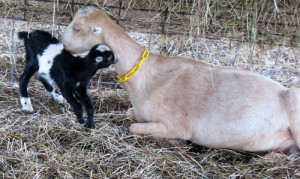 It didn’t take long beforeI realized I really didn’t like LaMancha goats. At first I thought it was their temperaments but they really aren’t any different than any other goat. It was that I hated to look at them because of their lack of ears. I switched from LaMancha goats to the Swiss breeds – Alpine, Saanen and Oberhasli. I kept more Alpine goats than any other breed and slowly grew my herd to 13 nice goats that I milked by hand and sold a good bit of milk – illegally. In North Carolina, raw milk can only be sold to be consumed by animals.

The goats did well for me until a woman purchased property below where I was living. Before she came in, the goats pretty much travelled all over the acreage around me (much of it conservation land), ate their fill of browse and then returned. The woman put in a high dollar horse barn and she took issue to the goats crossing her driveway. Our fences (by then my partner Wally had moved in with me) weren’t so good and we didn’t want to put the money into installing better fencing. I sold all of the goats – way too inexpensively for what they were – and bought a Jersey cow. Cattle are much easier to keep confined.

I loved my Jersey cows but they were extremely high maintenance. When we moved to the farm that we are on now in 2015, we went from approximately 25 acres to less than 10. When we lost a favorite cow to what I believe was milk fever because the vet was too busy to come out to treat her, we decided to go back to goats. We have good fencing here.

I bought six or eight Alpines from a breeder up in the mountains. They were good milking animals but they were not terribly thrifty and extremely ill tempered – not so much towards me, although some were, but towards each other. When I went back to work full-time (interestingly on October 15, 2015, seven years after I was laid off), we sold all of the Alpines and kept two Saanens and the kids they had that year. I didn’t milk them much. The next year (2016), we lost one of the Saanens after kidding.

This year, the first freshening Saanen/Alpine X had two kids and I pretty well broke her to milk. She was wild as a March hare and for some reason, her mother didn’t get bred when the others did. The vet confirmed she was pregnant but I somehow doubted her. Wally purchased two Oberhasli does (one is apparently pure and the other was crossed with Nubian) and bred them to a Saanen buck. We sold the Oberhasli/Nubian cross (she wasn’t a very good milker and was bad on the stand) and kept the pure Oberhasli – she’s not good on the stand either but she’s a beautiful goat with a gorgeous, easy to milk udder.

Over the past couple of months, we bought out a local woman’s herd of purebred Oberhasli goats and sold the Saanens. The Oberhaslis don’t give as much milk but, except for the one that Wally bought at the sale, they have excellent temperaments and don’t give me any trouble milking.

Milking is not always pleasant – especially in the summer. It’s hot and the flies are bad. It’s a lot of work. When I was selling milk, I had a lot of clients who wanted it but for some reason, I haven’t had a lot of interest in the milk. It’s okay, it’s their loss. We just purchased two bottle calves to raise on the excess milk.